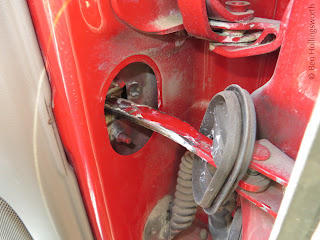 The rear side doors--especially the driver side--in our 2001 Chevy Tahoe had gotten rather stiff, to the point where our 5-year-old son had trouble opening his car door. It turned out that there's a spring-loaded arm called the "door check link" that rides on two bars to provide the half- and full-open detents. That bar was scraping against its two mating bars rather than riding smoothly, and that resistance made the door hard to open and close. Fixing it was as simple as greasing the edges of that bar.