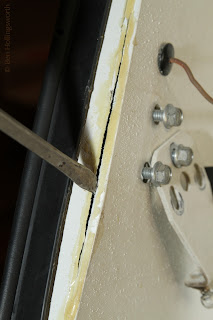 For the second time in the 17 years I've owned my Wrangler, the inner and outer shells of my fiberglass hard top separated due to the force of a failed window strut.  This can be fixed--or at least patched--with a little bit of 2-part fiberglass repair epoxy and some clamps.

The first sign of this problem is when the lift struts for the rear window of my hard top could no longer lift the window all the way up.  That's a sure sign that one of the struts has died, and the remaining one is supporting all the weight of the window glass.  That means that twice as much weight is now being supported at the mounting point of the remaining good strut.

The problem here is that the factory fiberglass hard top is actually a two piece design, and the window struts are attached to only the inner shell.  Over time, placing too much weight on the window struts will cause the two fiberglass shells to separate along the window frame where the struts mount.  When this happens, you then have twice the intended weight being supported by a shell only half as thick as intended.  That's bad. 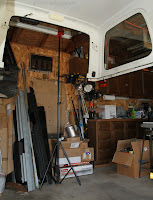 The first order of business is to figure out which strut is bad and replace it with a new one.  Finding it is easy.  Open the window & support it with something tall, like a 2x4 or (in my case) a photography backdrop stand.  Disconnect the lower end of each strut and try to compress the strut by hand.  The failed strut will be much easier to compress than the good one.  New struts cost about $20 at any parts store.

Once you've got the weight shared by two struts again, you can glue the fiberglass shells back together.  I used a 2-part epoxy made for patching fiberglass, but there are probably other epoxies that will work, too.  Here's the basic steps: 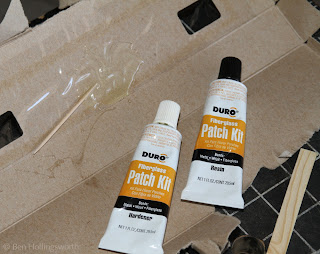 The first time I performed this repair, it held up great until the opposing strut died again.  When it failed again about ten years later, I did it the same way.  If I have to do this a third time, I'll definitely lay the top on its side for more thorough application of the epoxy.

Update:  This second patch snapped open again one cold, winter day just a few months later.  Laying the top on its side will have to wait until summer.

This is a pretty simple repair that anybody should be able to handle.  If you've got any questions or other remarks, please speak up in the comments below. 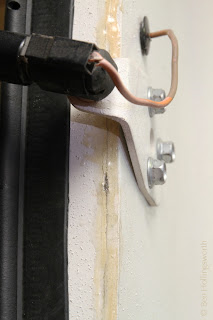