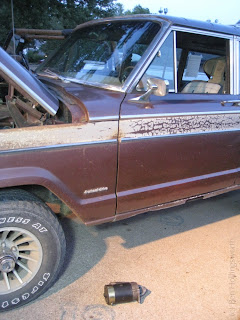 The same day that we hauled our Tahoe to the mechanic to have its fuel pump replaced, the starter on my 1977 Jeep Wagoneer started making a horrible screeching / grinding sound when I started the engine.  I immediately assumed that the nose gear from the starter wasn't retracting back into the starter after the engine started running.  I had replaced this starter 12 years (8000 miles) earlier, and the new one had a lifetime warranty, so I expected this would be a free, one-hour fix.  I should know better by now.

One of the things I love about this 35-year-old Wagoneer, and one of the reasons I hate to be selling it, is that it's so easy to work on.  With the 2" lift it had when I bough it, the chassis sits up just high enough to provide easy access when you have to crawl underneath it.  The engine bay is also pretty uncluttered, which means removing the starter only takes about 5 minutes.  One 1/2" nut secures the battery cable, and two 9/16" bolts (one from each direction) hold the starter to the transmission bellhousing.  A wobble joint and about 16" of extension bars did help gain access to these bolts for my ratchet handle.

Upon arriving at Advance Auto, the employees all marvelled at the 12-year-old receipt that I brought in.  Of course, I had kept it in the vehicle all this time, just in case.  I had paid $30 for the starter, and it now cost $50, so I'm glad I'd kept the receipt.

The starter nose was covered in metal dust, part of the nose housing had been ground away, and the starter rattled loudly inside when you shook it, so the employee didn't even bother trying to test it before agreeing to replace it.


Unfortunately, starters for 35-year-old Jeeps aren't in as high a demand as they once were, so none of the local parts stores stock them any more.  This is supposedly a Ford starter, but the mounting ears are different for the AMC bellhousing.  They'd have to ship one half way across the country (from Virginia), and it would take three days.

Remember that our other family-sized vehicle was also out of commission at the same time, leaving our family of five with just my four-seat Wrangler in the interim.  I'd be riding to work on my bicycle for a few days, it appeared.

The guy did suggest that if I came back the next morning, I could have the manager request overnight delivery (for an $18 charge), which sounded like a good option.

When I arrived the next morning, the manager looked up the part and found that one had already been shipped to their Kansas City warehouse that morning.  He could have that one sent up to us in Lincoln, Nebraska, the next day without incurring any additional shipping fees.  Bonus!

I picked up the new starter the next day and got it installed.  The Jeep ran great for about a day, but then the new starter began to whine as if the nose once again wasn't retracting quickly enough, and was getting spun very quickly by the motor once it fired up.  A week after I installed it, I had to remove the new starter & take it back.  AA's benchtop tester confirmed my suspicion:  the nose was very lazily retracting.  Time to order another one long distance.  At least our Tahoe was running again by now, so our family wasn't stranded.  That was especially convenient, because school was now in session for all the kids.

By the time I installed the new replacement starter, I was so familiar with the process that I didn't even bother getting out the work light (it was after sunset).  I just grabbed the necessary tools and did the job in the dark by feel.  I quite literally can now replace that starter with my eyes closed.

The second replacement starter sounded better.  It's been running now for over a month.  It still has a little bit of that same post-start whine, but not enough to make me pull it back out again.  I think the quality control of these replacement starters isn't what it used to be.  I'll keep my fingers crossed, and keep the receipt handy just in case.

If you've got any questions or comments, or if you'd like to share your own vehicle repair woes, please speak up in the comments below.
Posted by Obi-Wan at 8:00 PM

Email ThisBlogThis!Share to TwitterShare to FacebookShare to Pinterest
Labels: Wagoneer