Biking through the brier patch 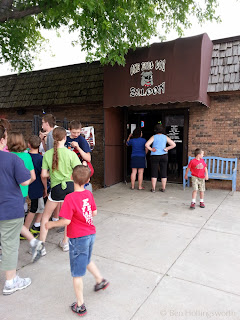 Fourteen of us--four adults and ten kids--recently cycled ten miles from Lincoln to Eagle, Nebraska, along the MoPac Trail for the weekly Nacho Ride.  It sounded like a fun ride.  It turned out to be quite memorable, though perhaps not quite as fun as we expected.  Aside from the younger kids getting worn out biking 20 miles in one evening, we also picked up lots of sand burrs along the way, resulting in eight tire punctures.  I was pretty well equipped for the hassle, but still not quite as much as I ought to have been.  This resulted in some upgrades to our cycling setups in the week that followed.

The ride out from the 84th Street trail head went well enough.  The two dads pulled the two 6-year-old boys on tag-along bike trailers, while the moms and other eight kids (aged 8-15) rode their own mountain bikes.  It took us an hour and five minutes to make the 10-mile trip with all the kids.

The One Eyed Dog Saloon in Eagle (our destination) sells typical bar food.  Their tacos and nachos are both decent.  The place was packed, but the staff did an adequate job of getting the food out quickly.  All the available bike racks and railings were taken, so we just cabled our bikes to each other in an adjacent empty lot.

We discovered the first of the flat tires when we went to leave around 7:45pm.  Sunset was near 9:00.  Since I was apparently the only one in our group of 14 who both knew how to patch a tire and had the necessary equipment, I took care of it.  Then we found another flat in my tag-along.  When we found another flat in the first bike (at 8:30pm, just 30 minutes before sunset), I decided to send the other 3 adults and the younger kids on home while the teenage boys & I stayed behind to fix the flat.  That first group still didn't get back to the trail head (and our vehicles) until 45 minutes after sunset.

This time, I immersed the punctured tube in the bar's restroom sink to look for holes.  It's a good thing I did, because I found two punctures, not just one.  As I was patching them, another of the boys found thorns buried in both of his tires.  I fixed the front tire (which again had two holes in it).  The back tire wasn't losing air yet, and since the thorns seemed pretty securely buried in the tire, I figured we could make it home all right without dislodging them. 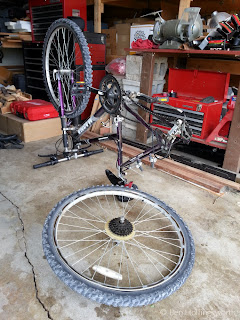 It was 9:20pm (20 minutes after sunset) by the time we finally left Eagle.  We pushed as hard as we could in an effort to get back home before it got pitch black.  With my heavier weight plus my 6-yr-old on his tag-along, my rig weighed about 100 lbs more than the teenage boys I was with, so I was struggling to keep up with them.

2.5 miles into our 10-mile return trip, we met up with another adult friend in his minivan.  It turns out that one of the younger boys had found flats in both of his tires, and since that earlier group had no way to fix them, the other dad had called in the cavalry.  We left my 6-yr-old and the teenager with the still-thorny tire to ride home in the minivan, while the remaining two teenagers and I (with my newly-lightened load) finished the remaining 7.5 miles in the dark without any headlights.  We ended up making the trip in 45 minutes, and arrived just 15 minutes after the rest of our group.

Even though my existing gear was able to get us all home, it only barely did so.  I decided that a few upgrades were in order.  Here's what I did:

My 13-yr-old son has started biking around town with his friends, so we've really got three bikes in our family that need to be able to get home on their own if trouble strikes.  Each of those bikes now has its own patch kit, pump, and tire levers.  Those three, plus my 11-yr-old daughter's mountain bike, will soon all have head and tail lights.

My wife already had a decent pump, and that's what saved us on this outing.  My oldest son's Y-frame mountain bike got a new Giant Control Mini 1+ pump.  Y-frame, full-suspension mountain bikes don't have a lot of cargo space, so we needed something small.  This one mounts underneath the frame.

My bike, with its larger, traditional frame, got a Bontrager Mini Charger pump.  This replaces my ancient pump which had been run over at one point and was now useless.  The threaded mounts on my frame's upright were too low to mount the pump mount, so I used only the upper bolt plus one zip tie to mount it.  It's functional.

Both of our older kids' mountain bikes got Sunlite thorn resistant inner tubes, as did our youngest son's tag-along bike trailer.  My daughter's mountain bike actually came to us with a tubeless, solid rubber front tire.  No air means no flats, but it also adds a pound or two to the weight of the bike.  Although Sliming the inflatable tires would provide even more protection, I'm not wild about how Slime can clog the valve stems, so I prefer not to use it.

Our oldest son got an under-seat bag to hold his new Park Tools GP-2 patch kit, his tire levers, and his new 15mm stubby combination wrench (his tires don't have quick-release hubs).  My wife (and eventually, I) also got 15mm stubby wrenches, since the tag-along bike trailer and most kids bikes also lack quick-release hubs.

All four mountain bikes will soon be outfitted with head & tail lights.  Previously, my wife had the only headlight in our family.  She and I both had taillights.  There are two styles of cycling headlights:  the "see where I'm going" style and the "don't hit me" style.  The latter style is much dimmer than the former, but also much cheaper.  If you're on a budget and don't spend gobs of time riding in the dark, you probably want the "don't hit me" style.  I'll update this page with specifics once we choose our lights.

I've always prided myself on being prepared for most unexpected trouble, and these upgrades should make our next rural cycling adventure much less adventurous.  Time will tell.  If you've got any biking horror stories or recommendations on how to avoid them, please speak up in the comments below.
Posted by Obi-Wan at 8:00 PM

Email ThisBlogThis!Share to TwitterShare to FacebookShare to Pinterest
Labels: Bicycles