Replacing the cabin air filter in a Chevy truck 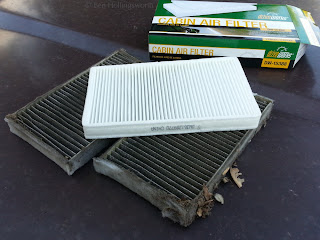 We've noticed recently that the interior of our 2001 Chevy Tahoe has been smelling pretty musty.  We cleaned all the carpets, but to no avail.  I was then reminded that the last time this smell appeared, it was time to change the air filter that protects the HVAC system in the cabin.  It's a pretty simple job, and one that should be identical on all 1999-2006 GMC/Chevy Sierra pickups and all 2000-2006 Tahoes, Suburbans, Yukons, and Denalies.

This cabin air filter is what keeps all the dust out of the interior when you're blasting the air conditioning while flying down a dusty road.  It also keeps leaves, pine needles, and maple helicopters out of your heater blower fan.  The filter is located under the dash, right above the front passenger's feet.  It only takes about 5 minutes to replace once you know what you're doing.

First, remove the protective cover that hides this whole mess from view.  It's held on by two 7mm screws that face upward (seen below). 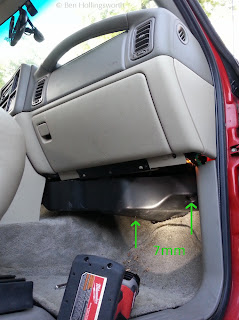 With the cover out of the way, remove access plate that hides the filters themselves.  It's held in place by a single 5.5mm screw that holds the back of the cover up (below).  With the screw removed, the cover will swing down and forward, and you can release the hinge at the front. 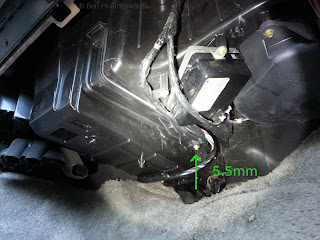 There are two identical filters in the compartment.  Remove the first by pulling it downward out of the filter slot.  The second filter is forward of this one, so you'll have to slide it rearward (toward the opening) before you can slide it down & out.  In my case, a small handful of leaves & debris had worked their way down into this compartment and gotten trapped by the filter.  I used a stick with a wad of tape on the end to clean all the debris out of the filter slot. 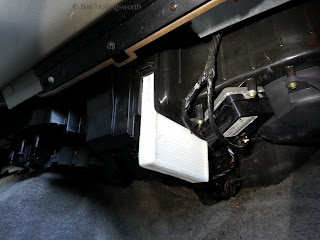 This is the second time I've replaced these filters in 12 years.  They'd gotten pretty dirty, so I was probably overdue for this job.  I imagine the recommended replacement interval depends a lot on the conditions in which you drive.  If you spend a lot of time on gravel roads, this might be a semi-annual maintenance job.

The new filters are a snug fit, but still weren't too hard to install.  They're directional, so make sure that the arrow on the side of the filter points in the direction of air flow:  from right to left.  Slide the first one in from the bottom, then push it forward out of the way.  The second one follows it in.

Replace the filter cover plate, then the big, decorative cover.  Done.
Posted by Obi-Wan at 8:00 PM