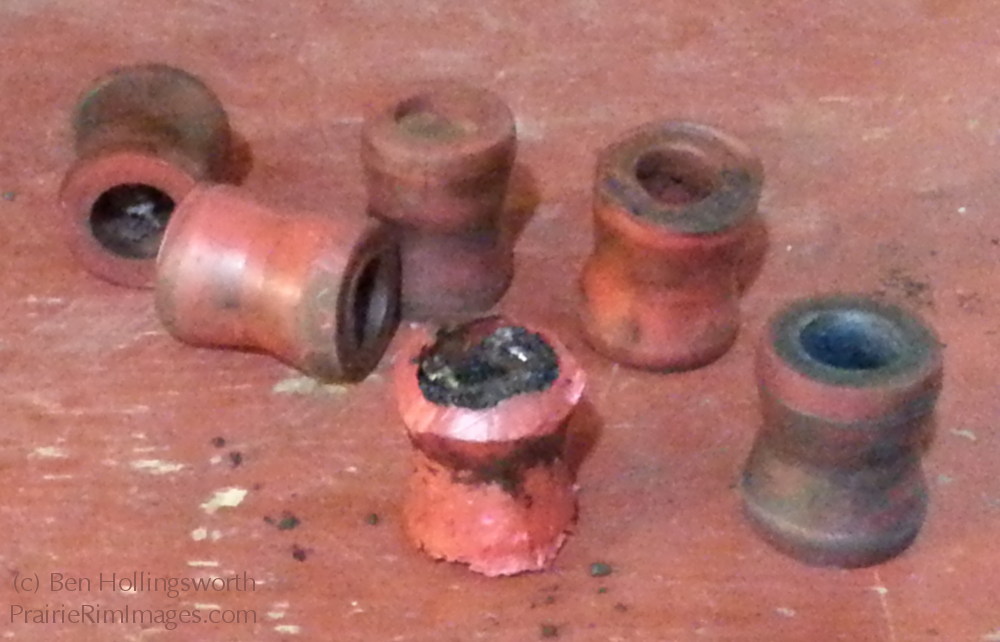 When I installed the spring-over-axle lift on my '95 Jeep Wrangler 15 years ago, I installed a new set of Rancho RS9000 shocks with polyurethane bushings.  They worked well, but in recent years, the suspension on my YJ has gotten noticeably noisy.  While underneath my Jeep last week, I noticed that the cause of that noise was worn out shock bushings that were past their prime. In many cases, the center hole was hogged out so that the bushing flopped around on the bolt.  In one case, the bushing was completely gone, leaving the bare shock eye to bang around on the bolt.  Obviously, it was time for a new set of bushings.

I chose to get a full set of eight Energy Suspension poly bushings from O'Reilly Auto.  Part number 9.8107G (black) or 9.8107R (red) fit the Rancho EB1 mounting eye, which is the standard size used on six of the eight factory original shock eyes.  The Rancho equivalent part number is RS978.  From the factory, the front upper mounts are pins, but I had adapted those to EB1 eyes during my SOA lift.

Removing the old bushings from the shock eyes could be really easy or really hard, depending on the situation.  Some of my old poly bushings were in pretty good shape.  A couple squirts of WD40 loosened the joint between the bushing & eye.  I used a 30mm socket as a receiver cup on one end, the 3/4" flange nut as an arbor on the other end, and a bench vice to simply press the bushing through the eye into the big socket.  That worked really well as long as the bushing was in decent shape.

Stock rubber bushings don't slide out nearly as easily as poly bushings, and can be a real bugger to remove.  The rubber wants to just stretch without letting go of the adjacent metal surfaces, and then spring back to its original location when you release the vice.  Using gobs of WD40 and a really persistent vice will sometimes do the trick.  Other times, I've had to get out my blow torch and burn the old rubber bushing out (in a well-ventilated space, obviously).  Fortunately, I was only dealing with poly bushings this time around.

Unfortunately, one of the eight bushings was in really bad shape and didn't want to come out on its own.  Even the mounting bolt didn't want to come loose easily.  I eventually worked the lower mounting bolt free by simultaneously rotating the bolt head with a wrench while beating the other end of the bolt with a 3-lb hammer.  The metal sleeve inside the bushing was completely rusted away, and the edges of the bushing had mushroomed around the shock eye.  I had to cut away as much of the bushing as I could reach with my utility knife so that I could press the rest of the bushing out.  That one shock took me more time than the other three combined.

When installing the new bushings, I rubbed a thin layer of white lithium grease around the inside of the shock eye and the pressed the bushing into place with my bench vice.  It popped into place easily.

The aforementioned metal sleeve exists because the bushing has a 5/8" hole, but it's mounted using a 1/2" bolt.  The 1/16" thick metal tube gives the bolt a snug fit inside the bushing, and also prevents the bushing from getting crushed between the shock mounting tabs when you tighten the bolt.  The rear upper eyes mount onto 5/8" studs, so they don't need sleeves.

Remember the missing and rusted-out sleeves I mentioned earlier?  Fortunately, I still had all of my old factory shocks sitting on a shelf, so I was able to steal a couple sleeves from those shocks to use in the new bushings.  The other sleeves were a little rusty, but still very functional.  To stave off future rusting, I slathered the inside of the sleeves with antiseize before inserting the brand new, 2.5", grade 8 mounting bolts.

Now that everything's installed, I'm amazed at how much quieter the Wrangler rides.  There's no more banging and clanking ever time I hit a bump on the road.  If I'd realized what condition the shock bushings were in, I'd have replaced them years ago.

Next up, I need to tear apart and possibly replace the leaf spring bushings, since I suspect they're in similar condition to the shock bushings.

Do you have any tricks for improving the ride quality of your leaf-sprung vehicles?  Please share them in the comments below!
Posted by Obi-Wan at 8:00 PM