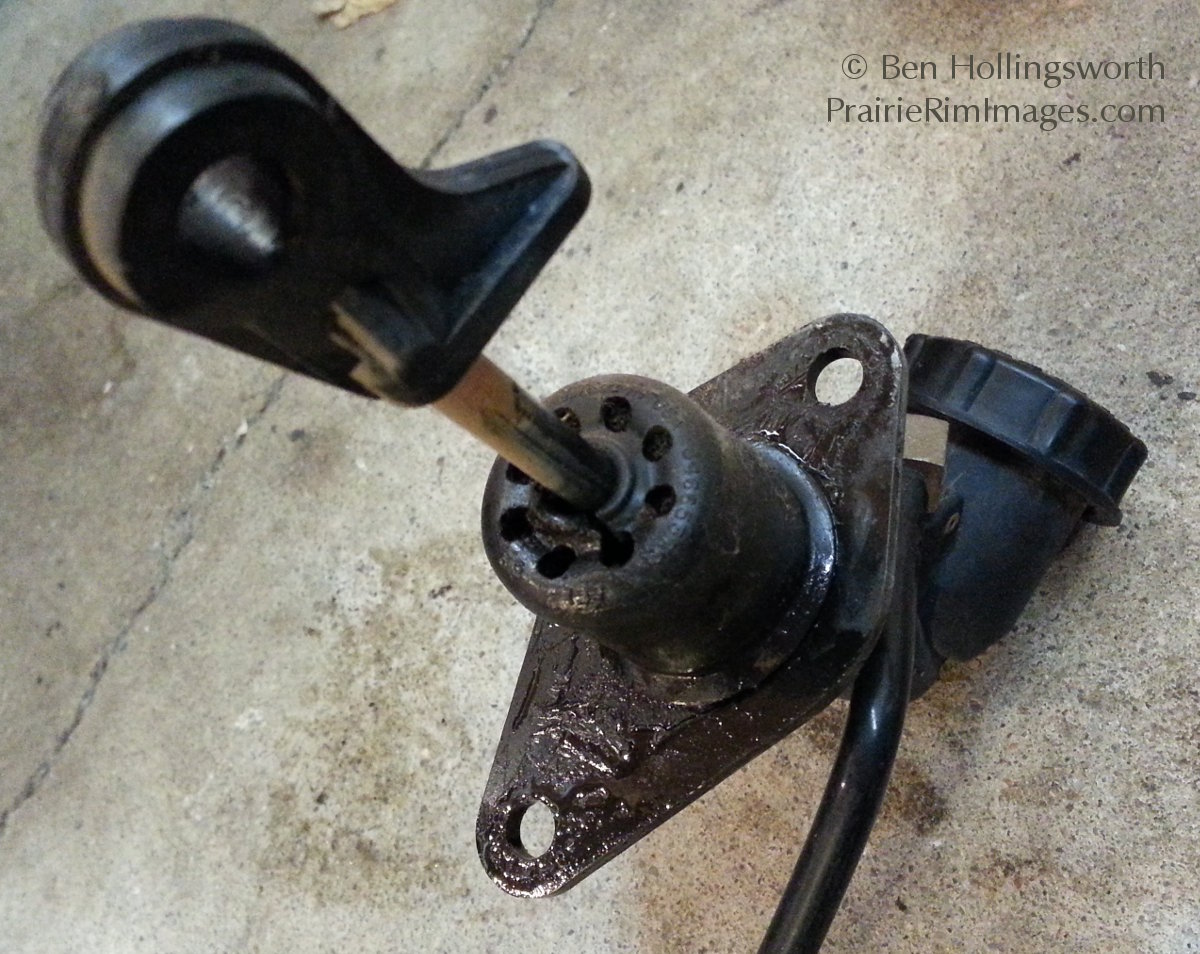 On Thursday--in the middle of our first really cold spell of the winter--I noticed that the clutch in my 1995 Jeep Wrangler was engaging with the pedal unusually close to the floor.  I made a mental note to investigate it over the weekend.  Unfortunately, when I tried to leave work on the next day, I found that the pedal went all the way to the floor and the clutch wouldn't even disengage at all, making shifting impossible.  We towed it home, and I got to spend a couple hours on Sunday fixing the problem.

When I stuck my head under the dash, I found brake fluid leaking down the inside of the firewall near the top of the clutch pedal, which confirmed that the clutch master cylinder was the problem.  If everything had been clean under there, it would have pointed to the slave cylinder (located down by the bellhousing) as the likely culprit.

The 1994 and later Wranglers (like mine) used an external slave cylinder that's bolted to the outside of the bellhousing on the left side of the transmission.  This slave cylinder does not have any bleeder valve, and is intended to be replaced as a single assembly along with the master cylinder.  It comes off with just two nuts, though.

When I called the various parts stores, they all had a replacement master cylinder in stock for about $40.  None of them had the entire dual-cylinder assembly in stock, but they wanted over $200 to order it.  (You can order the entire assembly from Amazon for about $130.)  I decided to get just the master cylinder and see if I could figure out a way to bleed it.  It was the right choice.

The trick, I found out, is to remove both the master and slave cylinders as a single unit, just like the factory service manual instructed.  However, instead of buying a replacement assembly, I replaced just the master cylinder, then bench bled the hydraulic line between the two cylinders before reinstalling the assembly.

Removing the assembly is pretty easy:


Once it's all out, you need to empty any fluid that may remain from the master cylinder.  If you've been forced to perform this repair, there probably won't be much fluid left anyway.

Reinstall the hydraulic line and roll pin on the new master cylinder, making sure that the line comes off the cylinder on the proper side (toward the engine).  Just squeeze the roll pin into place with channel lock pliers.

Now comes the fun part: bleeding all the air out of the hydraulic line so that your clutch pedal isn't squishy.  This is actually really easy to do, as illustrated by this video:


You basically secure the master cylinder in a bench vice or other elevated position, fill the fluid reservoir with DOT3 brake fluid, and repeatedly pump the slave cylinder's push rod until you no longer get air bubbles coming out of the reservoir.  Tap on the line periodically to help release the bubbles.  I didn't see any need to attach a puller to the slave assembly; I just used the factory push rod.

Once the bubbles stop, top off the fluid to about 1/4" below the top of the reservoir and tighten down the cap for all you're worth.  If it's not tight enough, fluid can leak out when you push the clutch pedal.  I had to use channel locks to get the lid tight enough.  Test how tight the pedal action is by holding the slave cylinder push rod in place and trying to depress the master cylinder's push rod.  You shouldn't have much more than 1/8" of play.

Note that not all master cylinders are made the same, so the caps probably aren't interchangeable.  My factory reservoir was thin-walled plastic, but my replacement was cast aluminum with a much thicker wall.  Although the caps were threaded the same, the gasket from the factory cap wouldn't fit inside the new reservoir.  That's a shame, because the new cap is unmarked and gives no indication to a newcomer that it's the clutch reservoir.  I had hoped to reuse the old cap, but couldn't.

If everything looks good out on the bench, it's time to reinstall the assembly using the opposite procedure describe above to remove it.  When installing the slave cylinder, make sure the end of the push rod is located in the right spot on the clutch lever in the bellhousing.  All four nuts should be tightened to about 25 ft-lbs.  Don't forget to replace the zip ties that you snipped earlier, since you won't want the hydraulic line to get damaged.

Once I had everything running again, I was surprised at how far off the floor the pedal had to be to engage the clutch.  I guess my hydraulic system had been slowly declining for quite a while.

All in all, this is a pretty easy job if you've got the right tools.  The pneumatic ratchet and the ratcheting open end wrench sped things up quite a bit.  For me, the worst part was having to lie on my back in the puddles of melted snow that were running off the Jeep in my heated garage.  Now that I know what I'm doing, I could probably do this job again in less than an hour.

If you've got any questions or suggestions, be sure to hit me up in the comments below.
Posted by Obi-Wan at 8:00 PM