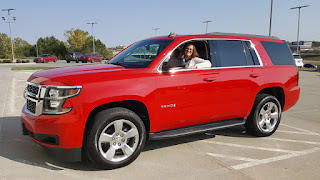 In early 2004, we bought a 2001 Chevy Tahoe to use as our family truckster.  It served us well for 15 years, and had 277K miles on the ticker when the transmission died.  We had hoped to use it past 300K, but decided this was as good a time as any to upgrade to a newer vehicle.  We loved the Tahoe's combination of maneuverability, cargo space, and towing capacity, so we replaced our 2001 with a 2016 Tahoe of the same color (Victory Red).  Victory Red is a hard color to find, and we were forced into a rather quick purchase, so I didn't get to do as much up-front research as I would have liked before the purchase.  Here, I'd like to share a few things that I've learned about our 2016 that I wish I'd known before hand.

This generation of Tahoe / Yukon / Escalade / Suburban / Sierra / Silverado was introduced in 2015 and ran through 2020.  Unlike previous generations, in which the pickup and Tahoe/Suburban platforms shared identical front end body parts, this generation shares not a single body panel with the pickups.

The 5.3L is now a variable displacement engine.  If you're not pushing it hard, the computer will disable half of the cylinders, giving you a very efficient V4 instead of the powerful V8.  This works seamlessly for us, and if it weren't for the indicator on the instrument cluster, we'd never know it was happening.  Thanks to this feature, our Tahoe has been averaging about 18 mpg around town when using 91E gas (footnote:  we live in the country, so "around town" includes 7 miles of 55 mph roads before we see our first stop light).  Our 2001 Tahoe averaged about 14 mpg under the same conditions.  All this comes while raising the horsepower from 285 to 355 hp and the torque from 325 to 383 ft-lbs.  The new Tahoe claims 22 mpg on the highway, which is better than our little 2007 Kia Sportage 2.0L gets.

I haven't towed anything with the new Tahoe yet, but I'm anxious to try out the integrated brake controller, the rear back-up camera (for hooking up), and the more powerful engine when combined with our 8000-lb horse trailer.  I still need to get some wider towing mirrors, though...

Man, oh man, this new 2016 is SO much quieter than the 2001.  I'm not sure if it's road noise from the tires (the new tires are not as aggressive as our old tires), or wind noise from the body, or engine noise, or all of the above, but it's very noticeable.

Another noticeable change that we don't like is the increased size of the truck.  The driver seat sits 2" higher off the ground, but the front end of the hood stands 4" higher, and the receiver hitch stands 8" higher.  Consequently, the visibility in front of your nose is noticeably worse.  New farm tractors are doing a great job of sloping their hoods to improve forward visibility.  Why are trucks going the opposite direction?  I'm also going to need a much deeper drop hitch for the trailer balls in order to keep our trailers level.

Another annoyance is that E85 (flex fuel, or FFV) capability was removed starting in 2015.  That capability was added in 2002, the year after our previous Tahoe was built, so we completely missed out on that feature.  That's not a huge deal for our daily life, but there are certain truck stops along our common vacation routes that offer nothing but ethanol blends, and most of them are 15+% ethanol.  The good news is that the standard engine can handle E15 just fine.

Some of the coolest new features involve the MyLink infotainment center:  an 8" touch screen that controls not only the audio, but also many other electronic accouterments in the vehicle.  Alas, this is also the source of many headaches, too.

Most of the marketing material I've found seems to imply that this entire 2015-2020 series of Chevy trucks has the same functionality in this area.  This is NOT the case.  Not only have various software updates improved functionality, but there were features introduced in various years that cannot be added through simple software updates.

The current version of MyLink is IO6, and includes a decent onboard navigation feature.  The IO5 version lacks navigation capability.  This navigation database was installed by the factory when your truck was built.  GM releases nav database updates quarterly, but it'll cost you $150 to get a new version.  Most people will probably prefer to use the navigation on their smartphone instead of the truck's database, so I expect nobody but rental car companies will ever buy these updates.  The caveat here is that the instrument cluster's speed limit display (which could be a really cool feature), comes from the nav database.  If the speed limits change (as they did recently on all Nebraska state highways), then your truck won't get the memo and will display the wrong speed limit.

Even within the IO6 MyLink, there are numerous changes.  Our 2016 Tahoe was built in December 2015, and when we got it, still ran software version 23415881.  This early version had Apple CarPlay support, but not Android Auto.  The Android Auto support didn't appear until May 2016.  Reportedly, version 84028483 also has this shortcoming.  We had to have the dealer flash the latest software onto our MyLink in order to get Android support, per GM technical service bulletin (TSB) 16-NA-042.  An active warranty would have covered this, but our truck was out of warranty by the time we got it, so we had to pay $132 for an hour of service time.  Our software version is now 84131949, and Android Auto works quite well.

Everything I read online indicated that the MyLink software should be able to update itself automatically if it's connected to the Internet.  The truck is capable of serving up a Wi-Fi hotspot through OnStar's contract with AT&T.  At this writing, unlimited 4G service costs $25/mo from OnStar, and that's separate from the normal OnStar services.  Once your truck has Wi-Fi, every mobile device in the truck can connect to it & use it.  I guess one advantage of using the truck's Wi-Fi is that it has a larger antenna than your phone, and should get a better connection when coverage is questionable.  This assumes that AT&T has decent coverage in your area, which it does not in Nebraska.

I had read that the truck should also be able to connect itself to any other Wi-Fi network that it can see, such as the one at your house or one served by your phone, and can update itself that way.  Our 2016 didn't have this settings option, either.  I'd hoped to get it with the software update, but didn't.  After much research, I learned that this Wi-Fi setting was a new feature in 2017, so our 2016 can't ever get it.  Same goes for the auto-updating software mentioned above, as well as the downloadable apps from the MyLink Shop.

Another 2017 addition was upgrading the back seat's LCD screen's input jack from composite RCA jacks to HDMI.  How did this not happen until 2017?  2017 also allows back seat passengers to project their device screens up onto the overhead LCD for sharing movies & the like straight from their phones.  Although I haven't tried it in our 2016, it sounds like we can't do this.  Fortunately, our kids are beyond the age of wanting to share movies in the car while traveling.

Overall, we really like the 2016.  Was it worth $40K?  Time will tell.  I'm a competent mechanic, and do most of my own work on our older vehicles, but the complexity of this new truck scares me a little.  I'm not looking forward to our first repair job, and I pray it comes during the extended warranty period that we purchased.