Running lean in a Tahoe 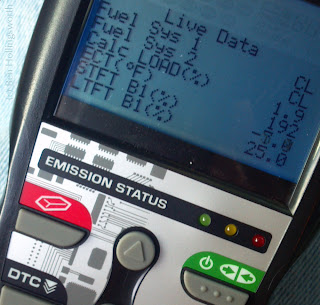 On the way home the other night, our 2001 Chevy Tahoe started chugging and hesitating, as though it didn't have quite enough fuel to perform as requested.  Plugging in my OBDII scanner indicated that, sure enough, two diagnostic trouble codes had been triggered that indicated the engine was running leaner than it should.

The DTC's in question were P0171 and P0174, which indicate that both banks 1 and 2 (left and right sides, in no particular order) were running too lean (too little fuel).  This is primarily dictated by the Long Term Fuel Trim (LTFT) levels, which are largely controlled by the oxygen sensors.  The fuel trim levels indicate whether the engine is running lean (positive values) or rich (negative values).  Short Term Fuel Trims (STFT) bounce all over, providing momentary corrections as requested by the O2 sensors.  LTFT's indicate more coarse corrections, and are the values considered when throwing these DTC's.

Once the engine has heated up and the fuel system has entered a closed loop status (meaning the O2 sensors are now producing meaningful output), an LTFT value that stays above 23% for six seconds straight (along with a host of other more common requirements) will trigger a trouble code.  On my code reader (an Innova 3140), the highest possible LTFT value is 25%.  Our truck was pegged at 25% almost the entire time -- sometimes even while idling in the driveway.  On a test drive, it almost never dipped below 23% except immediately after I dropped to idle speed.

I followed the procedure on page 6-2346 of my Chevy factory service manual (which sucks in comparison to my Jeep manual -- just sayin'), which had me test the fuel pressure at the port on the fuel rail above the right cylinder head.  I had to buy a new fuel pressure tester for that ($45 for an Actron kit  unit that I'm sure I'll use again someday).  It indicated that my truck was only seeing about 48-50 psi -- well below the 55-62 psi that the service manual expected.  The pressure did hold steady after the pump was turned off, which ruled out a leak in the pressure regulator between the fuel supply & return lines.

Further tests required even more specialized tools that I didn't have and couldn't have bought locally on a Saturday morning even if I'd wanted to.  The most likely possible causes for low pressure are a plugged fuel filter ($20) and faulty fuel pump ($300).  My service records show that it had been 85,000 miles (8 years) since I last replaced the fuel filter, so I decided to do that & hope for the best.  You're supposed to replace the filter every 30K miles, so we were long overdue.

My 12-year-old son helped me with the repair.  He's been eager to learn how to fix things lately, and I love spending time with him.  The fuel filter is bolted to the inside of the left frame rail below the front of the front door (right in front of the fuel tank).  The filter is connected to the two steel fuel lines with two 5/8" flare nuts.  The hex fittings cast into the filter itself are 13/16".

A little PB Blaster on the flare nuts allowed us to break them loose easily enough.  Be sure to have a metal or glass container handy to catch all the fuel that will leak out of the open connections.  The entire line between the filter and the engine will drain down in your face if you're not careful.  Be sure you're wearing safety glasses!  After the nuts were loose, I had a heck of a time getting the flared line out of the filter until I popped the front line out of the plastic clip that holds it to the frame.  With that line out of the way, the filter just slides forward out of the bracket that holds it to the frame.  There's no need to unbolt that bracket.  After sliding the new filter into place, I brushed a little bit of antiseize onto the flare nuts to deter them from freezing up the next time I do this.

With everything reconnected, we turned on the fuel pump a few times (it runs for two seconds every time the ignition is turned on) and purged the air from the fuel line using the pressure tester's purge tube.  With the air gone & the line full of fuel, we checked the gauge... and found that the pressure had actually dropped 2 psi from where it was before.  What dismay!  It now sat at around 46-48 psi, which was only 80% of what the service manual said it should register.  Starting the engine and idling for a minute still yielded the same values.

I wasn't in the mood to replace the fuel pump just yet (it resides inside the fuel tank), so I took the truck for a test drive to get the emission system heated up so I could check the OBDII live data while driving.  I plugged in the scanner & set it in my cup holder while I drove.  I imagine that continuously checking the LTFT values while driving would probably fall under our state's "no texting while driving" law, so I tried to keep one eye on the road at all times.  Both LTFT values still pegged at 25% whenever I got on the throttle, but they quickly backed down to between 10-20 whenever I let up just a little bit.  This may be enough to keep the DTC's from triggering during in-town driving, but I'm curious what will happen the next time we're out on the highway.  I never was able to duplicate the chugging problem we experienced the other night, which is good.

In short, it looks like replacing the filter helped the situation, even if it didn't solve the problem completely.  I'll keep the low fuel pressure in mind in case the problem reappears, and I'll keep my code reader in the Tahoe's center console for a few days as well.  If the problem pops up again, I'll let you all know how we proceed.

Update:  Four months later, my fears of a dying fuel pump were confirmed.  The pump died suddenly, leaving my wife & kids stranded on the highway (fortunately only 5 miles out of town).  Read the whole story in this article.  I'm glad it didn't happen at a more inconvenient time, but I'm still kicking myself for not just biting the bullet and having the pump replaced back when the red flags first went up.

If you'd like to share your own tales of success or woe, please speak up in the comments below.  We always love to hear from you.
Posted by Obi-Wan at 9:09 PM