New cat-back exhaust for the YJ 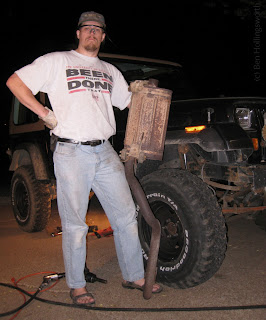 Over the last few months, my 1995 Jeep Wrangler started to develop an annoying rattle from the exhaust whenever the engine was running. Crawling underneath to do a little shaking and beating indicated that something was rattling around inside the original, 17-year-old muffler.  Time for a replacement.  I wanted to get a full stainless steel replacement cat-back system, but it just wasn't in the budget.  I opted instead for Pacesetter TFX Kat-Back system made of aluminized steel.  It probably won't last as long as a stainless system would, but it cost only 1/3 as much.

Ten years earlier (when the YJ was just 7 years old), my original catalytic converter took on a serious internal rattle and was replaced with a high-flow stainless steel cat from Random Technology.  You can read all about that experience on Jedi.com.  Disconnecting the original cat from the front down pipe was a nightmare.  Thanks to the stainless steel cat, disconnecting the muffler was much easier this time around, though it still took an hour or two of grinding and beating. 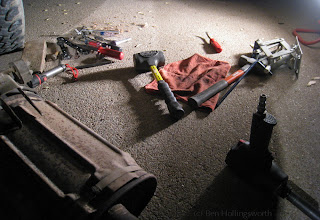 I wanted to avoid mangling the muffler any more than necessary, because at this point, I still wasn't sure whether the muffler's rattle was self-induced or whether part of the cat had come off and blown back into it.  If the cat was at fault, I'd have kept the original muffler.

Removing an exhaust from a YJ that stands 9" taller than stock is a whole lot easier than it would be from most other vehicles.  The first step is to disconnect the rear exhaust hanger by the tail pipe outlet.  I replaced the factory bolt with a stainless steel bolt/nut/washer combo years ago, so I no longer have to worry about that bolt rusting solid like the original bolt did.  You'd be wise to replace yours as well. 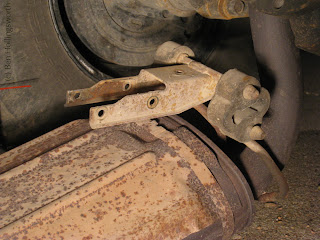 The next step is to disconnect the bracket that holds the rear of the muffler to the body tub.  There's one vertical screw (3/8" head) that connects to a heat shield, plus two horizontal bolts (7/16" head) farther forward.  These are a bear to get to.  An 8" extension comes in very handy.  Alternatively, you could try to just pull the rubber bushings off the muffler's hanger rods, but the bumps on the ends of those rods makes that a nontrivial task.  I find it easier to unbolt the whole bracket.  BTW, the Pacesetter muffler hanger has no such bumps on the ends of its hanger, so that problem is henceforth solved. 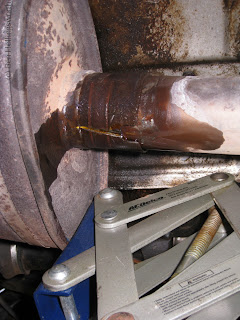 With the muffler hanging loose, it's time to unbolt the exhaust clamp that holds the muffler to the cat and then slide the muffler rearward.  Sounds simple, doesn't it?  The problem with exhaust clamps is that they squeeze a dimple into the two exhaust tubes so that they won't slide off easily.  This dimple also stops exhaust fumes from escaping.

In order to slip the muffler (the outer tube) past that dimple, I had to cut a slot along the bottom of the muffler's inlet tube using a Dremel tool.  I was then able to pry the inlet tube open to relieve pressure on the dimple.  It's a lot like unbuttoning a polo shirt to provide a looser fit around your neck. 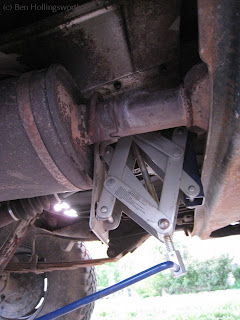 Even with the cut, the muffler still needed some persuasion to come loose.  I jammed a scissor jack in between the muffler and the cat to provide a bit of pressure, then used a 3-lb sledge hammer to beat the muffler rearward, tightening the jack whenever progress was made.  It eventually came free.

One more road bump was specific to my Jeep.  When I installed my Ford 8.8" rear axle, I reworked some custom rear shock mounts to improve my ground clearance.  The new shock location prevented the tail pipe from snaking its way over the axle, so I had to disconnect the shock first.  This may or may not be an issue with the factory shock setup. 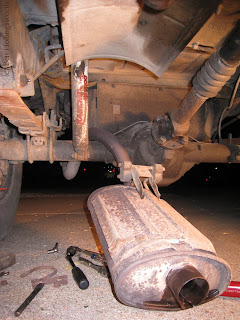 With the muffler off, I could see no evidence that anything from the cat had entered, and there was definitely something rattling around lose inside the muffler.  I surmised that the innards were rusting off, and decided to order the replacement.

When shopping for cat-back systems, it seems that all anybody cares about is how the exhaust sounds.  A few people talk of power gains.  Fewer still mention ease of install.  Nobody mentions longevity.  In that regard, the general consensus seems to be that the Dynomax system is the quietest, almost duplicating the stock sound and power.  Pacesetter TFX is the next quietest, with a noticeable rumble above stock.  The other options get louder from there.  Both of the above are aluminized cat-back systems and cost just over $200.  The best resource I found was an online review by JP Magazine of ten different cat-back systems, complete with YouTube videos demonstrating the sound of each exhaust.

Although JP Magazine rated the Pacesetter's installation as very easy, I found otherwise.  The rear hanger placed the tail pipe right up against the gas tank heat shield.  I had to heat & bend the hanger nearly 1/2" in order to move the pipe to be centered between the gas tank and leaf spring. 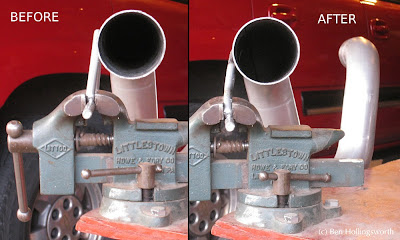 The axle-clearing hump in the rear pipe also comes closer to the body pan than did the stock pipe.  This is especially annoying for me, because with my lift kit, my axle doesn't come anywhere near the exhaust.  I'd have loved to move that bump downward a good 2".  I suppose getting a custom-bent pipe would be my only option for that, though. 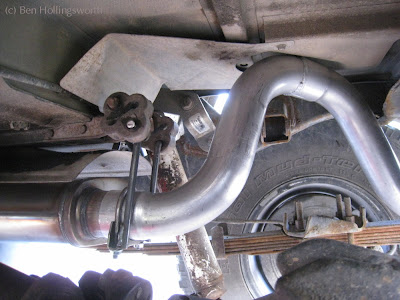 Other than that, the Pacesetter system is nice.  The rear pipe is 2.5" -- a considerable upgrade from the 2" factory pipe.  It comes with a polished stainless steel outlet pipe which is not only horribly ugly, but it sticks out far beyond the rear bumper, just begging to get hit by a rock.  (I'd previously trimmed back my factory tail pipe to be flush with the spring shackle to avoid such damage.)  Fortunately, the outlet pipe is a disconnected extra part, and I simply chose not to install it at first.  Without that, the end of the aluminized tail pipe terminates safely an inch or two behind the shackle.  The polished output pipe did seem to lower & soften the exhaust note a touch, but I didn't feel it was worth the aesthetic drawbacks of using it (more on this later).

With the rear hanger bent properly, installation was a breeze.  I grabbed my bottle of high-temp antiseize and slathered it on any metal-to-metal joint.  This includes the slip joint between the muffler & cat as well as on all nuts & bolts.  Antiseize will make your life much easier the next time you have to disconnect any of these parts.  No mechanic should be without it.

With the install done, I fired up the Jeep... and still had a rattle in my exhaust.  It appeared that both the muffler and the cat were falling apart.  I figured I'd be dropping the skid plate and inspecting (probably replacing) the 10-year-old Random catalytic converter.  However, after a few weeks of being busy with other things, the rattle disappeared.  It definitely sounded like it was coming from the cat, but it's gone now.  Now I don't know what may have been causing it.  With my hard top & doors off for the summer, I'll be much more sensitive to exhaust noises, so I'll keep listening for it.

Below are two videos demonstrating what the new exhaust sounds like, both with & without the polished stainless steel exhaust tip.

Aside from the remaining rattle, I initially liked the new exhaust note.  It's quite a bit louder and more rumbly than stock, but not terribly so, and then only when I really get on the gas.  However, as the days and weeks wore on, I grew tired of the exhaust note.  I'm not sure if just got "broken in," or if my opinions changed.  The difference vs stock is almost unnoticeable at idle speed or at low throttle.  When you get on the throttle (especially between 2000-3000 rpm), the exhaust gets very loud.  Almost embarrassingly loud, IMHO.  I finally resorted to installing that ugly, polished exhaust tip.  It clashes with the no-chrome look of my black Jeep, but it makes the exhaust note significantly softer during hard acceleration from 2000-3000 rpm.  I think I'll have to stick with it after all.  The good news is that the tip is easily removable with one bolt, which is something I'd definitely recommend doing before 4-wheeling off road.


What about performance gains?  The Jeep feels a little bit peppier at high rpm than it used to, but that could just be a placebo.  Then again, high rpms are where the larger, smoother exhaust path should make the biggest difference.  I've taken to revving the engine to 4000 rpm (red line is 5250) under hard acceleration, and it seems to do well.  I wish I'd had the good sense to do some timed 0-60mph tests before the install...

So that's the story about my new cat-back exhaust.  If you've got any opinions or questions, please speak up in the comments below.
Posted by Obi-Wan at 4:22 PM