The death of a fuel pump 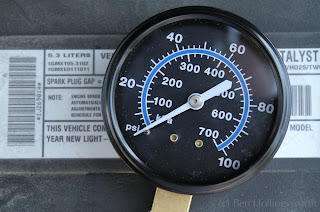 Back in April, I wrote about our 2001 Chevy Tahoe chugging, as if it wasn't getting quite enough fuel.  I suspected the fuel pump might be at fault, but replacing it is neither easy nor inexpensive.  Instead, I replaced the fuel filter (which was long overdue), and the problem went away... for four months.  Last Friday, my suspicions were confirmed when the fuel pump died quite suddenly and completely, leaving my wife & five kids stranded on the side of the highway.

You can read about the first sign of trouble in an earlier post.  In the months since then, our Tahoe has made numerous highway trips through rural areas far from home, and never batted an eye.  I never was completely at ease after the problem just went away all by itself, but I also didn't want to spend hundreds of dollars chasing problems that may not actually exist.

On Friday, my wife was taking some of our kids and some neighbor kids on a fishing trip to the Missouri River--an hour's drive from our house.  The plan was to hang out there with some other friends and then drive back home after sunset.  Five miles outside of town, the Tahoe lost power climbing a hill, and then died completely 60 seconds later.  Stacy was fortunate to be able to get it off the highway and onto the shoulder before it stopped.  I gave chase with my 1977 Wagoneer (which I'd been trying to sell, and thankfully hadn't yet) and towed them back home.

It didn't take long to confirm that the fuel pump was the problem.

Normally, when you first turn the ignition key to the "on" position, the fuel pump will run for two seconds to pressurize the lines before you start the engine.  If you listen carefully, you can hear it hum.  We got no such hum.

Just to be sure, I pulled the fuel pump relay out of the electrical box.  It checked out OK.

I pulled out my GM factory service manual and looked up the procedure for replacing the fuel pump.  As I expected, it involved draining all 26 gallons of fuel from the tank, disconnecting a bunch of stuff, and dropping the tank out from under the Tahoe.  I've removed the gas tank from both of my Jeeps before, and I know first hand what a pain it is (not as much on my Wrangler, but more so on a vehicle like my Wagoneer or Tahoe).

Of course, Stacy had filled the tank just before the problem hit.  Even if I did have somewhere to store 26 gallons of gas (which I don't -- our other vehicles are also nearly full), this is one of those jobs that really benefits from having a vehicle lift, which most home mechanics don't.  Google tells me that the labor charge from a professional is around $200-300 for this job (plus another $300-350 for the parts themselves).  I figured it was worth my time to farm this task out to a trusted pro, like my friend John at Daily Driver Auto Care in Lincoln.

As an aside, while searching for repair estimates online, I ran across an Android app called "RepairPal."  It used to be an awesome app for estimating repair costs, finding a nearby mechanic, and even calling roadside assistance if necessary.  Alas, the user comments indicate that the app developer broke something back in March 2012 (it's now August), and the app has been nearly worthless since then.  I think this is worth keeping an eye on and installing if the developer ever gets his act together.  RepairPal also has a traditional web site that still works wonderfully for estimating repair costs.

When I spoke with my mechanic about bringing it in, he gave us a couple little tips about GM fuel pumps.  Often, when they're about to die, filling the tank will cool them off quickly and will shock them into failure.  That's why they always seem to fail when you've got a full tank.  It's not just irony, it's reality.

Another tip he gave us is that you can sometimes get the pump to start working again (temporarily) by beating hard on the bottom of the tank while trying to start the engine.  I lay on my back and used the heal of my palm to whack the bottom center of the tank while Stacy turned the key.  After a couple seconds of thumping and cranking, the pump & engine sprang to life.  This is a reportedly temporary fix, and we were glad that the engine stayed running long enough to drive it to the shop under its own power.  I wish we'd known about this trick when it died on the side of the highway!

A couple days and $600 later, we had a running Tahoe again.  Unfortunately, when we got it back, the check engine light was lit, indicating a bad signal from the EVAP sensor.  The mechanic had to again drain & drop the tank, and found that a pin had become bent in the sensor's connector.  He fixed it for free, of course.  All in all, I think that was $600 well spent.  My time was better spent on other projects that week.

This whole mess wouldn't have been quite so inconvenient if our 1977 Wagoneer hadn't lost its starter the day after the Tahoe died.  With both of those trucks out of commission, our family of five had only my four-seat Wrangler to drive around.  We made it through, though, and everything is running well again.

If you've got any questions or comments, or if you'd like to share your own fuel pump saga, please speak up in the comments below.
Posted by Obi-Wan at 8:00 PM