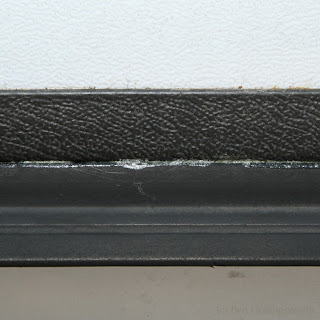 When we bought our 1997 Coleman Santa Fe pop-up camper a few years ago, I knew there would be a few things that needed fixing.  One of the items on that list was the rubber weather seal along the bottom edge of the top shell.  It keeps the innards dry when the camper is packed up for travelling.  It's a two-part seal, with one half that adheres to the shell and another half that does the actual sealing.  Both halves occasionally have trouble staying attached -- a problem when I remedied recently.

There were two problems with our seal.  In some locations, the upper part of the seal (a U-shaped channel) had become separated from the bottom edge of the ABS plastic top shell and was hanging down.  After cleaning both the ABS and the inside of the rubber U channel, I wet down the ABS shell slightly and then ran a bead of Gorilla Glue (the "dries white" flavor) along the inner surface of both sides of the channel.

Gorilla glue dries at a moderate speed, and it expands quite a bit when drying, so it's important to get the seal clamped in place pretty quickly.  I "clamped" mine by lowering the top shell all the way down and sandwiching the seal between the top and bottom portions of the camper.

It worked like a charm.  I did have a little bit of Gorilla Glue expand out of the seam, but a razor blade cleaned that off easily enough.

At other locations around the shell, the U channel was still attached, but the lower portion of the seal which actually does the weather sealing had become detached from the channel.  The end result was the same:  part of the rubber seal was hanging limp from the top of the shell and not doing its job.

This time, I got some sandpaper and roughed up both the top & bottom surfaces of the rubber.  I then cleaned it off as well as possible using a wet rag.  Glue doesn't stick well to dirt.

On the recommendation of This-To-That, I used contact cement to reattach the two halves.  To use contact cement, you brush a layer onto both surfaces, let it dry completely (15-60 minutes), and then sandwich the two parts together for an instant seal.  TTT said that applying a second coat of cement to each surface before attaching them would make a stronger seal.  It also warned that the biggest mistake most people make with contact cement is not waiting until the glue is completely dry before pressing the pieces together.  If it's still tacky to the touch, it's too early.

I did apply two coats, and waited about 20-30 minutes after each coat to make sure it was dry.

When you finally reattach the two halves of the seal, remember that contact cement adheres instantly.  You need to be very sure that the parts are lined up properly, because if you need to rip it back apart a split second later, you may as well start the whole process over again.

The contact cement seemed to work well, too.  Time will tell how long both of these repairs last.  It's a pretty simple process, so even if I have to redo it every couple years, it's a pretty small inconvenience.

What tricks do you have for fixing weather seals or gluing rubber to other materials?  Please speak up in the comments below.
Posted by Obi-Wan at 8:00 PM

Email ThisBlogThis!Share to TwitterShare to FacebookShare to Pinterest
Labels: Camper